Our downstairs cloakroom is accessed directly from the hallway as you enter Little Ravenswell.  Originally the room had a window above the sink and this opened out on to a patio area.   With the extension now built where the patio once sat we had to brick up and remove the window.   In a small space its often common to paint a room white to give the illusion of space however I was concerned that white could make this small space look bland and boxy.

At first I had my heart set on some Farrow & Ball Tourbillon wallpaper, its a bold print and quite unlike anything I thought I might pick.  Yet seeing it and holding it is very different from when you see it on screen.   The two side walls we thought we’d cover in the tourbillon (shade 4807) but we then realised that due to the size of the repeat on the pattern (it has quite large curves) we’d actually need three wallpaper roles – which would have cost over £300, more than we wanted to spend to just wallpaper two small walls.  So back to the drawing board and we ended up chosing this Allen & Braithwaite black and gold dragonfly wallpaper, at £15 a roll it’s far cheaper and great quality.  I’ve seen the same wallpaper design sold elsewhere for double this price so it definitely pays to shop around, we also got samples of the wallpapers we liked to see what they looked like before buying.

With the two largest walls now wallpapered, we’ve painted both the smaller end walls in the Farrow & Ball shade of off-black, we had this colour matched at Valspar at B & Q.

We had an ingress built in behind the toilet to give a bit of a feature to the room and in here I’ve placed a pineapple set of bookends that I also found in B & Q, they may not stay here but for now it works ok.

The toilet is the Cheverney CC pan from Eastbrook and the sink is the Rita wall hung basin from Soak.   The tap is the biava mini also from the Eastbook.   The gold mirror on the wall has sentimental value to me, it was my late Grandfather’s and when he died it was given to me 🙂   The pipework was boxed in and painted in F & B off-black.   We have three different lighting options in the loo!  Yes three!  A hanging pendent light to the left of the sink, this was an inexpensive ebay find, the bulb cost nearly as much as the fitting!   We then have two spotlights in the recess and then a main spotlight in the ceiling.

We found the floor tiles in Topps Tiles and chose them after taking a sample of the wallpaper to the store. They are 40 x 60 slate black , whilst I’d never have thought I’d chose a dark tile, these do look really good against the wallpaper and paint.  I picked up some unusual animal shaped coat hooks in Homesense and we placed these behind the door to store coats. I didn’t want the hallway to be cluttered up with all our coats at the bottom of the banister, these hooks are a great hidden tidy godsend.

Visitors who’ve seen the room always remark on it, positively and I’m happy that we chose not to play it safe and instead go DARK.

Here you can see the before and after: 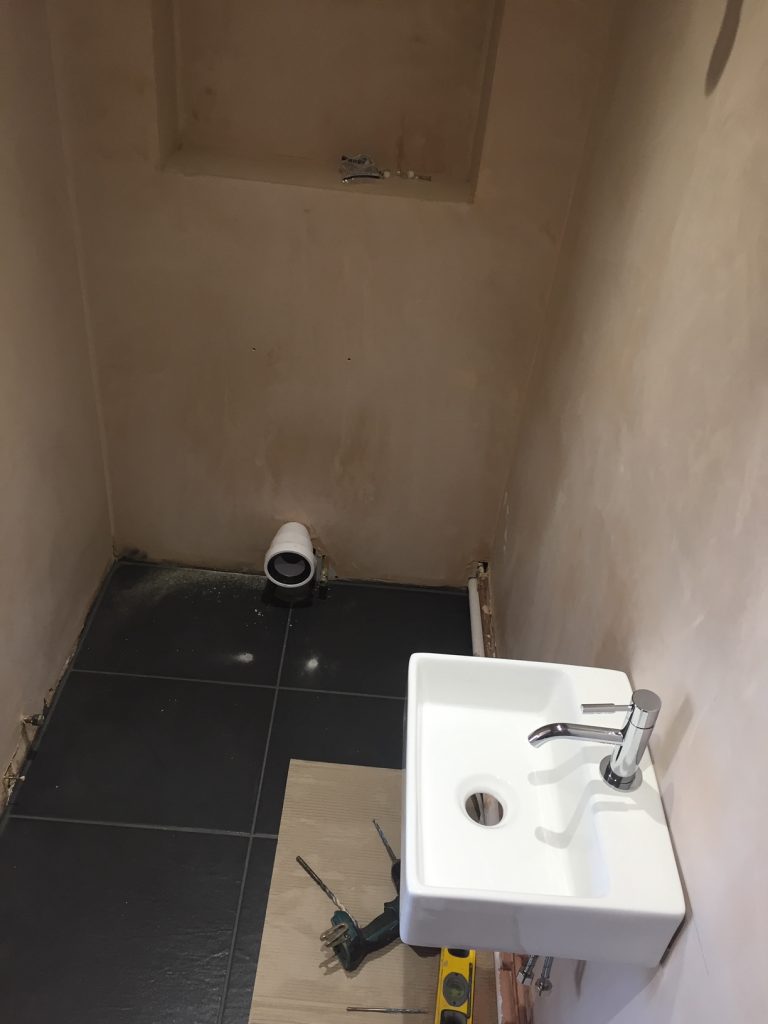 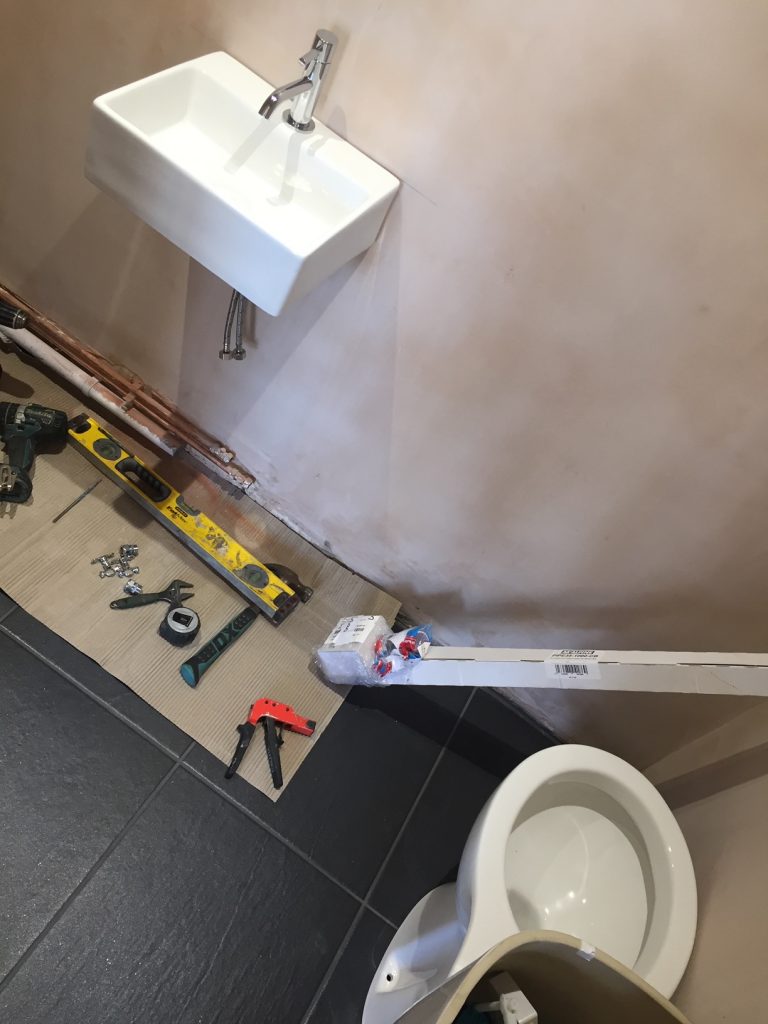 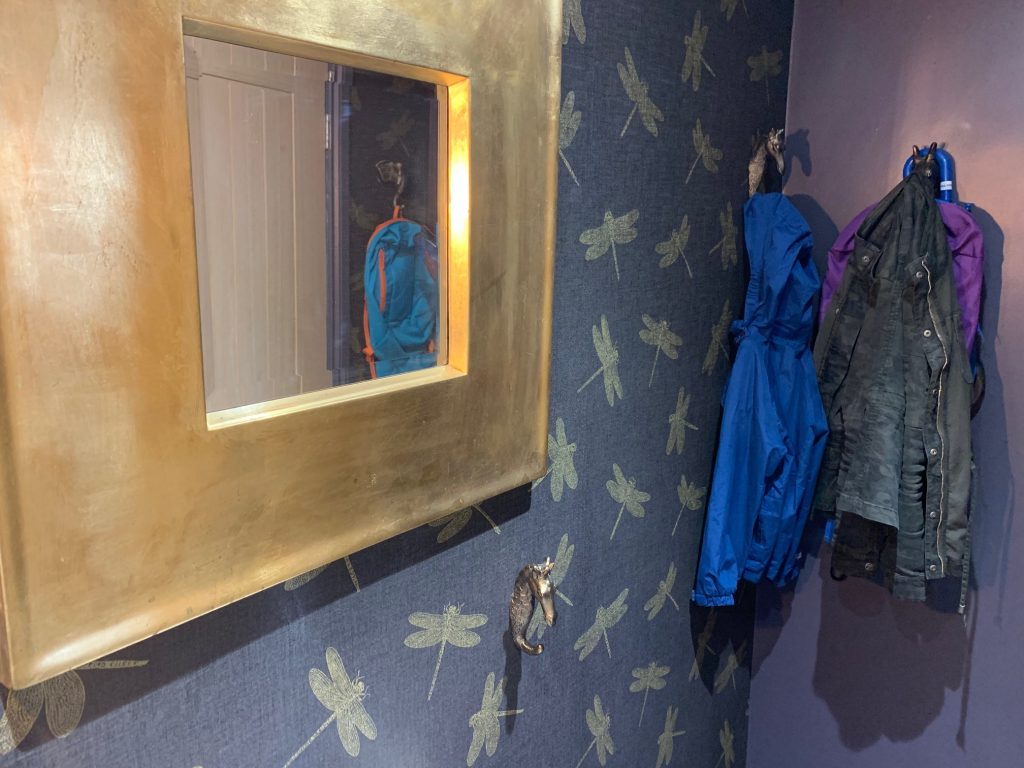 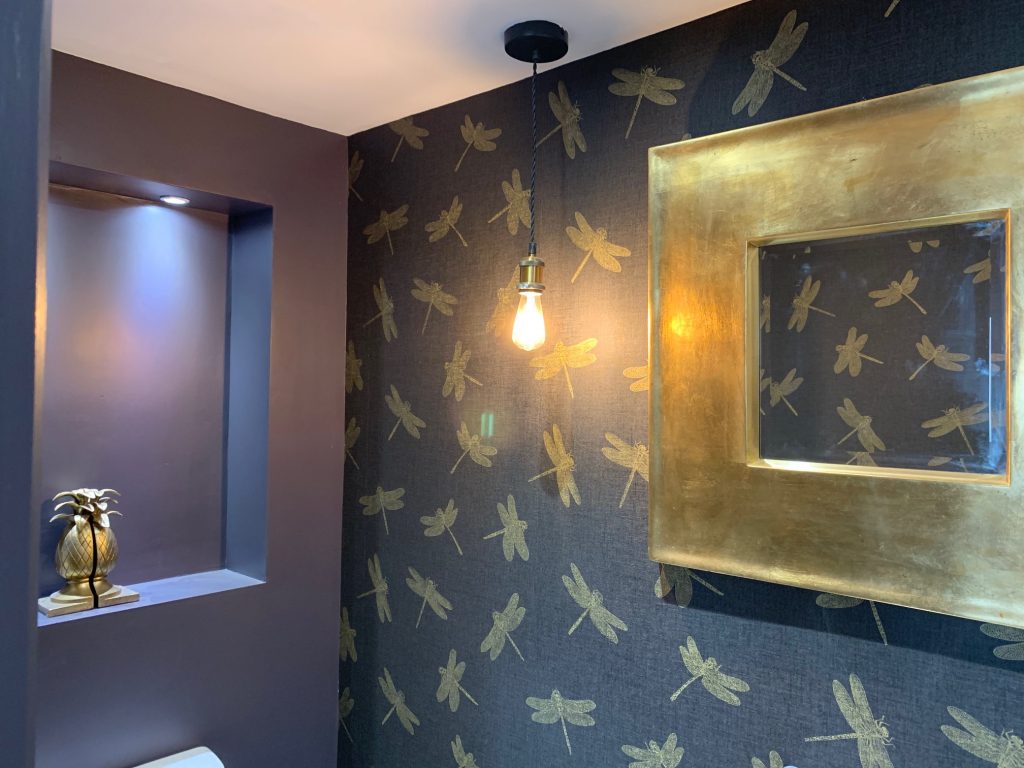 3 comments on “Where’s it from ? The Downstairs Cloakroom Transformation”